It would appear that the improvements in silicon technology are slowly coming to an end. Increasing the level of integration and clock speed also increases the amount of heat losses which cause serious problems to modern day computer systems. There are many alternative technologies that are fundamentally different than silicon and one of them is also the topic of our research.

In our laboratory we design and fabricate nanoscale memory devices based on tantalum disulfide (TaS2). We use optical and e-beam lithography and can produce electrical circuits with resolution as low as 20nm. TaS2 exhibits many different non-volatile resistive states at low temperature between which we can switch using electrical or optical pulses. The switching energy of such device is in the range of a hundred femto-joules and is comparable with other new technologies that are emerging. The main focus is to improve a functioning multibit memory device based on TaS2 that could be used in superconducting single flux quantum system. 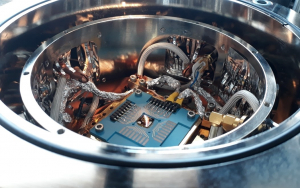 A memory chip mounted and wire bonded on a ceramic holder in the center. The holder is placed inside the cryogenic chamber and connected with cables.