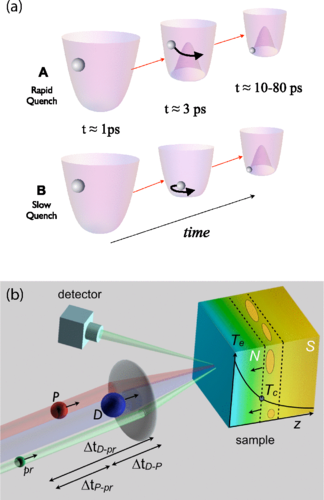 Systems which rapidly evolve through symmetry-breaking transitions on timescales comparable to the fluctuation timescale of the single-particle excitations may behave very differently than under controlled near-ergodic conditions. A real-time investigation with high temporal resolution may reveal insights into the ordering through the transition that are not available in static experiments. We present an investigation of the system trajectory through a normal-to-superconductor transition in a prototype high-temperature superconducting cuprate in which such a situation occurs. Using a multiple pulse femtosecond spectroscopy technique we measure the system trajectory and time evolution of the single-particle excitations through the transition in La1.9 Sr0.1 CuO4 and compare the data to a simulation based on the time-dependent Ginzburg-Landau theory, using the laser excitation fluence as an adjustable parameter controlling the quench conditions in both experiment and theory. The comparison reveals the presence of significant superconducting fluctuations which precede the transition on short timescales. By including superconducting fluctuations as a seed for the growth of the superconducting order we can obtain a satisfactory agreement of the theory with the experiment. Remarkably, the pseudogap excitations apparently play no role in this process.