Non-equilibrium states of matter have become of great fundamental and practical interest in recent years because of their wide importance in diverse areas of physics. The phenomenon in which the electrical resistance of some substances, called superconductors, is practically disappearing at very low temperatures or the magnetic field from them is completely displaced has extremely useful possibilities; the key challenge remains to bridge the low temperatures. The project focuses on understanding new hidden quantum states that are unbalanced or metastable. The metastable state in 1T-TaS2 is an example of great fundamental interest in physics since it is the first example of a hidden state which forms under non-equilibrium conditions. It has enormous potential as an ultrafast memory device.

With the rapid development of new time-resolved techniques, the temporal dynamics of competing processes and interactions were recently disentangled in a wide variety of complex condensed matter systems. The physics of metastable mesoscopically ordered textures emerging through phase transitions has been largely experimentally inaccessible till now because experiment could not resolve complex irregular structures. Here we propose to investigate mesoscopic textures created under controlled non-equilibrium conditions in complex electronic materials, with a focus on topological and quantum jamming transitions where transition outcomes are determined through quantum selection processes. The experimental breakthrough comes with the use of low-temperature single-shot excitation scanning tunnelling microscopy and tunnelling spectroscopy, studying single transition outcomes with atomic spatial resolution. 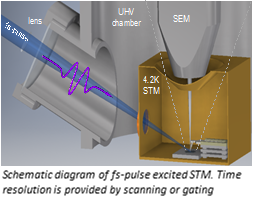