The article was chosen as an Editor’s Suggestion! 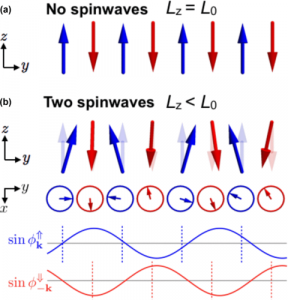 The impulsive generation of two-magnon modes in antiferromagnets by femtosecond optical pulses, so-called femto-nanomagnons, leads to coherent longitudinal oscillations of the antiferromagnetic order parameter that cannot be described by a thermodynamic Landau-Lifshitz approach. We argue that this dynamics is triggered as a result of a laser-induced modification of the exchange interaction. In order to describe the oscillations, we have formulated a quantum mechanical description in terms of magnon pair operators and coherent states. Such an approach allowed us to derive an effective macroscopic equation of motion for the temporal evolution of the antiferromagnetic order parameter. An implication of the latter is that the photoinduced spin dynamics represents a macroscopic entanglement of pairs of magnons with femtosecond period and nanometer wavelength. By performing magneto-optical pump-probe experiments with 10 femtosecond resolution in the cubic KNiF3 and the uniaxial K2NiF4 collinear Heisenberg antiferromagnets, we observed coherent oscillations at the frequency of 22 and 16 THz, respectively. The detected frequencies as a function of the temperature fit the two-magnon excitation up to the Néel point. The experimental signals are described as dynamics of magnetic linear dichroism due to longitudinal oscillations of the antiferromagnetic vector.