System for preparation and characterization of Langmuir-Blodgett Films

Our Lagmuir-Blodgett (LB) film preparation and application system (KSV Nima) is a modular device designed to prepare and study thin layers of amphiphilic molecules on the surface of water and other liquid subphases, and to transfer these layers from the surface of the liquid subphase onto various solid substrates. The Langmuir trough (dimensions L = 782 mm, W = 75 mm, H = 5 mm) is equipped with a suitable dipping well for immersion of the substrate. The film is transferred from the surface of the subphase to the substrate by vertical immersion (or emersion) of the substrate into (or from) the fluid, which is arranged by a motorized translation stage. With each step of immersion (or emersion), a molecular monolayer of selected amphiphilic molecules is formed on the substrate. In this way, a single or multi-layer surface coating with a very well-defined structure and thickness is obtained.

During preparation of the film on the liquid subphase (Langmuir film), the system provides accurate control of the surface area and surface pressure of the film, as well as control of temperature (from -20oC to 130oC, stability 0.02oC), pH and level of the subphase. The surface potential meter (-5V < U < 5V, sensitivity 1 mV) can be used to monitor electrical polarization of the surface layer. If needed, a transparent sapphire window (20 mm in diameter) can be inserted into the Langmuir trough instead of the usual dipping well, which enables characterization of the film by various spectroscopic and other optical methods. The system also includes a special scaffold that enables illumination of the Langmuir film with LED sources of different wavelengths (e.g. 360 nm, 440 nm), which is aimed at analyzing and manipulating surface layers of photosensitive materials. Structural characteristics of the surface film can be monitored in-situ by the Brewster angle microscopy (BAM). When transferring the film to the substrate, the effective surface area and surface pressure of the film, the speed and direction of the substrate movement, and the time intervals of various transfer cycles can be controlled.

The laboratory is also equipped with a system for preparation of distilled water (Milli-Q, 18.2 MOhm) and an aspiration system for cleaning the trough. The entire trough with accessories is placed in the fume hood (workspace 1200x600x900 mm3), which ensures proper filtering of organic solvents (HEPA filters). All units are connected to a single system, which is controlled by the KSV computer program. 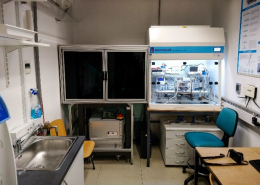 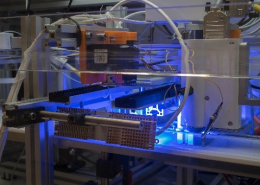 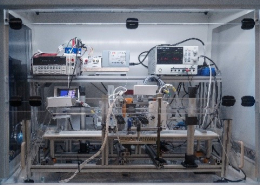