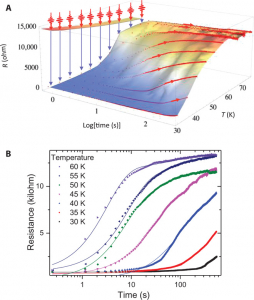 Controllable switching between metastable macroscopic quantum states under nonequilibrium conditions induced either by light or with an external electric field is rapidly becoming of great fundamental interest. We investigate the relaxation properties of a “hidden” (H) charge density wave (CDW) state in thin single crystals of the layered dichalcogenide 1T-TaS2, which can be reached by either a single 35-fs optical laser pulse or an ~30-ps electrical pulse. From measurements of the temperature dependence of the resistivity under different excitation conditions, we find that the metallic H state relaxes to the insulating Mott ground state through a sequence of intermediate metastable states via discrete jumps over a “Devil’s staircase.” In between the discrete steps, an underlying glassy relaxation process is observed, which arises because of reciprocal-space commensurability frustration between the CDW and the underlying lattice. We show that the metastable state relaxation rate may be externally stabilized by substrate strain, thus opening the way to the design of nonvolatile ultrafast high-temperature memory devices based on switching between CDW states with large intrinsic differences in electrical resistance.

See all current points of interest: