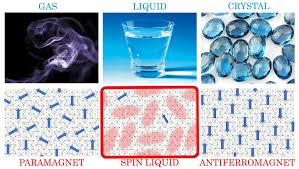 The existence of a quantum spin liquid (QSL) in which quantum fluctuations of spins are sufficiently strong to preclude spin ordering down to zero temperature was originally proposed theoretically more than 40 years ago, but its experimental realization turned out to be very elusive. Here we report on an almost ideal spin liquid state that appears to be realized by atomic-cluster spins on the triangular lattice of a charge-density wave state of 1T-TaS2. In this system, the charge excitations have a well-defined gap of ∼0.3 eV, while nuclear quadrupole resonance and muon-spin-relaxation experiments reveal that the spins show gapless QSL dynamics and no long-range magnetic order at least down to 70 mK. Canonical T2 power-law temperature dependence of the spin relaxation dynamics characteristic of a QSL is observed from 200 K to Tf = 55 K. Below this temperature, we observe a new gapless state with reduced density of spin excitations and high degree of local disorder signifying new quantum spin order emerging from the QSL.